The SRP modules were originally designed in 2016 to support coral cuttings and increase the natural resilience of the coral reefs surrounding Pangatalan Island. The main objective was to restore the coral reefs destroyed by dynamite fishing.

The SRP provides a new habitat for marine flora and fauna. They are designed in reinforced concrete and manufacturing on site. Any type of coral can be fixed on the SRP, without any plastic or chemical compound. SRP also allow natural recruitment of corals. The survey shows a survival rate of 76.6 % and an attachment rate of 70.9% amongst the coral fragments fix on the SRP within the first year. 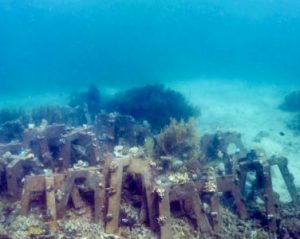 Attachment of the coral on the SRP after few months

In order to determine the best site for restoration, studies are conducted using photo-quadrats transects and ecosystem mapping. These observations give a good understanding of the affected areas and help  us to figure out how to act to improve their resilience.

When a site is validated by the studies, SRPs are installed. To ensure structural complexity, different sizes of SRP are mixed. The lengths of the feet of the modules are adjustable to ensure a better stability stability in steep slopes. Our only rule : SUSTAINABILITY FIRST ! What is the coral? Coral is part of family of anemones and jellyfish, so coral are animal. They are commonly divided in two kind: hard coral, Scleractinian, and soft coral. First, Scleractinian are form by polyps, living in a colony and secreting calcium carbonate skeleton. Consequently, hard coral is considered as a reef building organism, constitute coral reef and are at the origin of Atolls.

There is numerous kind of coral skeleton form and polyps, that define the different species. More than 800 different species have been identified all around the world. Depending the species, coral grows slowly, between 1 to 10 cm per year.

Corals are 25% heterotrophic and 75% autotrophic

Corals live in symbiosis with microscopic algae, called Zooxanthellae. 75% of the coral energy come from zooxanthellae via their photosynthesis process. In return, these algae are protected inside the polyps and can absorb some nutrients excreted by their host. Photosynthesis take place exclusively during the day, then during the night, polyps deploys their tentacles (where stinging cells, the cnidocysts, are located) for capture particles in the water.

The Coral and its color

Normally, coral polyps have no color. The color of coral come from the density of zooxanthellae inside its tissues, which can vary between 0.5 and 5 million cells per m². So, a healthy coral is very colored. If coral is subject to stress, the symbiosis with the zooxanthellae will be broken, leaving the coral « white » (the color of the skeleton). Then, coral will lose most of its energy source, and can survive only for a short period. If environmental conditions still not favorable to the return of zooxanthellae, the coral die, and filamentous algae will take its place. Coral reefs represent only 0,1% of the world’s ocean surface but contain 25% of marine biodiversity and more than 30% of species diversity of fish. Indeed, coral constitute a safety place for many marine species, a nursery for juveniles of fish and invertebrates, and a food source for corallivore species, like parrotfishes. People who live on the coast, especially in Indo-Pacific, are highly dependent of coral reef. Coral reefs are important for coastal protection by making a shield against strong storms and typhoons. Make a donation alone or with friends and Sulubaai Foundation will install your artificial reef composed by SRP for your coral fragments, geolocated and referenced to your name.

Thanks to your donation, you contribute to the restoration of coral reefs and their habitat function for many marine organisms, which have been destroyed by dynamite fishing, and then you help local population to protect their main food resource.